Feminist or Feral: A Glance into the Icons of Contemporary Feminism

Remember asking yourself as a little girl, why can boys run without tops on but girls can't? Well, it seems the world is still asking this question - a question of what ‘equal rights’ should stand for. There are many different sides and opinions that range from over-favouring to sensibly radical. One organisation, Femen, teeters with this idea through a very radical and media grabbing approach. Beginning in Ukraine and gaining popularity in the late naughties, Femen boasted out against prostitution and pornography; but the organisation soon became much more. Encouraging women to strip down to their utmost vulnerability: topless, the group accrued more and more members. Taking after their strong female predecessors who fought women's rights in the 20th century, Femen challenges current societal issues with female body shaming and associations. 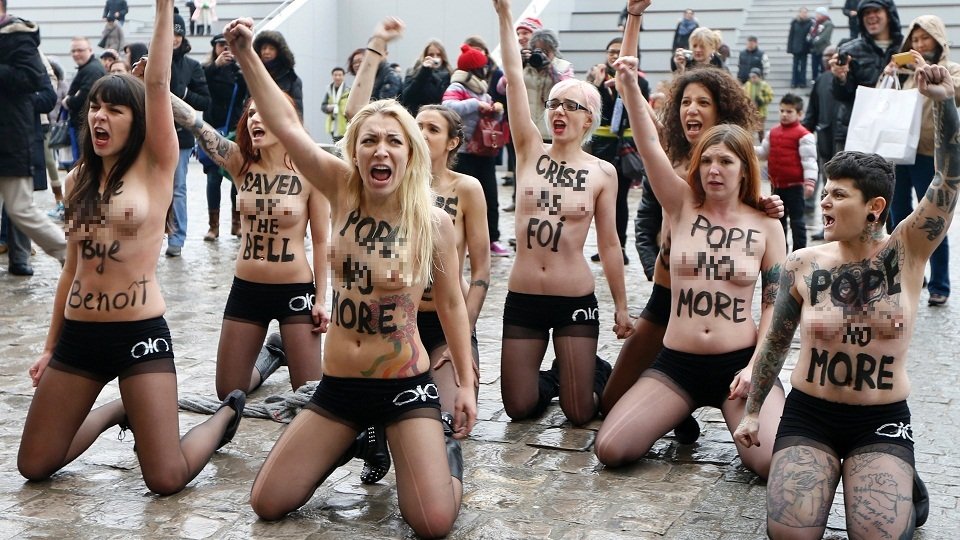 “By stripping,” Femen says, “women expose their vulnerability but also use their naked bodies as weapons. Its grand aim is to give new meaning to the nude female, as a political tool instead of a sex object.”

In a time now when bodies (both male and female) are being persecuted and picked apart at every opportunity, we've endured some of the harshest forms of objectification yet. Despite having less freedom in the past, it seems that globalisation and technology have brought more issues with objectification than ever before. Femen encourages a radical approach, and one (previous) member was inspired by their acts of defiance: Amina Sboui.

Dealing with another level of male dominance, Amina was born and raised in an Islamic culture that insists on women adhering to a strict dress code and following many strict rules. Amina dipped her fingers in the work of Femen and became a member for a bit. After she felt the group was Islamophobic, she cut her ties. Though still inspired by their feminist ideals, she decided to do something. Sick of ‘the man’, she went about solving this problem in a traditional naughties fashion: post a topless photo of herself online. Casually reclining on a leather sofa, cigarette in hand, eyeliner on, topless, and “My body belongs to me; it’s not the source of anyone’s honour” painted across her breasts, Amina pushed ‘post’ of the photo that showed off her current state. After this, the response was, as you’d expect, mixed with shouts of praise and hatred. Since, her act has sparked protests, death threats, negative allegations of all sorts, but has also stood as a symbol for women, and especially muslim women, everywhere.

Amina took a two year hiatus in Paris after the picture was posted in 2013, and is now back and hotter than ever. Channelling her energy into a new magazine, Sboui is making a new name for herself as not only an image, but also a voice. “Farida” as she’s aptly named it, translates into an Arabic girl’s name, and is a mirage of the English word “freedom”. It will be a “feminine feminist magazine” that will feature make-up, fashion, cuisine, books, and topics of current debates, such as abortion, homosexuality, refugees and secularism. Amina aims Farida “to be interesting to every woman.” Feminism is a touchy subject - we know that; but hopefully Farida will preach messages that will reach audiences in a different way. Though we support Amina’s intentions with her 2013 approach, there is always the concern of being ‘too literal’ or ‘too extreme’ with acts of protesting as such. Some consider her method to be degrading, though others feel it’s not enough. Femen first only realised their media potential by going nude. They gained attention when they were nearly stripped naked, though they went viral when they freed the nipple. Another fellow feminist, Chimamanda Ngozi Adichie feels that “gender as it functions today is a grave injustice,” though she takes a different approach to her beliefs. She believes in teaching the (maybe sometimes unintentionally) ignorant by demonstration where she allows them to draw the conclusions themselves. In her Ted Talk, she told a story of a man she was out with that did not understand preferential treatment. So, the pair were out to dinner and she tipped a valet out of her own pocket. He then turned to him, completely disregarding the fact that she’d just stuck her hand in her own purse to retrieve her own money, and said ‘thank you.’ The man looked at her in disbelief. It is regular daily acts like this that Chimamanda uses to teach lessons because she sees that this has a longer impact than contrasting Femen’s strategy: going topless. When she began her esteemed career as a Nigerian author, unlike most feminists today, it was her peers who were the first to label her. After she was labelled, she began to see how the word comes with baggage - a lot of baggage. She then began to call herself a “happy African feminist who doesn’t hate men.” It is amazing to see the different associations with one label. The biggest difference between ‘a feminist’ and ‘feminism’ is the motive. Unfortunately, there is a stigma against a woman outright labels herself as a feminist: that she is angry, fueled by adrenalin, and needs to be a part of something.

Though the movement’s origins date back to the beginnings of Women’s Rights, feminism today takes on a whole other facade. Social media has allowed women to post both anonymously and with an ascertained sense of confidence found hidden behind a computer screen. Some women have even taken the movement so far left that it has depreciated the movement. The word itself alludes to the latin meaning that puts an emphasis on women. This is where the problem lies. Some declared super feminists insist that the world be adjust to their favour. The concept of equal rights, means that if Chimamanda wants to tip a man from her own money out of her own purse, she deserves the thank you. This is the key: a new movement called “Power Feminism”.

Naomi Wolf, another feminist activist, says this movement is builty by what women believe they can achieve. She mentions that women during the time of the Gulf War drew inspiration from female soldiers. “If the woman behind you at the checkout counter at Wal-Mart can crush a foreign enemy, and probably disable an unarmed domestic assailant, what can you not do?” she boasts. This wave of Power Feminism has affected women everywhere; not to not shave your armpits to show you’re ‘manly’, not to take off your top to gain media attention, but to show why you’re a force to be reckoned with just because you are. Amina Sboui’s magazine airs in January of 2016. Chimamanda Ngozi Adichie is exceeding all expectations in Nigerian culture and literature. Naomi is giving women empowerment without the negative baggage. All we know is that we’d really like to be able to run topless - just because we can (even though it would hurt…) - and we’d like to free the nipple on Instagram - just because we can - and not have the world judge. We should be able to pay and not get smirked at, be eligible for that killer promotion at work - even when you’re PMSing. We don’t want to have to try to gain the respect we deserve. Hopefully, Amina’s magazine, Farida, and powerful voices like Chimamanda and Naomi will change this.